Your first consideration might actually be based on what materials you have on hand. If you don't have a hook it might be easier to construct a fish trap rather than try to build a makeshift hook. If you aren't in a wooded area, you might not be able to find a straight piece of wood to construct a spear. A fish trap is a great alternative that can be built with all sorts of different materials.

One of the great things about using a fishing trap is that it is passive. You can go do other things while the fish are caught. You don't have to take the time to actively seek them out. Once you have got your traps setup you can just leave them and come back later. This frees you up to do other things and can save a ton of time.

One challenge you may face when fishing is knowing the right time and place. Depending on the time of day and the season, the fish may or may not be biting. You also need to know where the fish are. Are they hanging out near the shore under low hanging branches? Are they in the deep end of the pond? Are they near the rocks or the sand? With a fish trap you don't have to worry about what time of the day is the best or if the fish aren't biting because of the weather. You just place the trap and wait as the conditions change. You don't have to worry as much about exactly when the optimal time is. Just leave it there all day and night. You don't have to waste a ton of time trying to catch fish in the wrong spot. You can place traps in multiple locations at the same time. Even if you don't have the exact right spot, you can just wait for the fish to come to you. If the fish are in deeper water due to cold weather, you can also place your trap there.

Another advantage to using a fish trap is that you might catch other things like crabs or crayfish depending on where you are located. Crabs are incredibly common in saltwater and sometimes even in freshwater. In saltwater, you might end up catching lobster or octopus as well. In freshwater lakes and streams there is a good chance of finding crayfish.

Using a fish trap is just plain easy. If you know what you are doing, you can catch fish with minimal effort. With a tiny bit of knowledge and a little skill you can provide yourself with an excellent food source.

Types of Fish Traps and How to Build Them

There are many different types of fish traps. The type you choose will most likely depend on what materials you have on hand, where you are located, what type of fish you are catching, and what you actually know how to make. We are not going to cover every possible type of trap here but we will go over most of the more common types that we think would be useful in survival situations.

Cage With A Funnel

This is a really neat and effective type of fish trap that can be constructed with a bit of effort. The idea is relatively simple but the implementation can be a bit more elaborate. To build one of these, you would first construct a cage. This can be done with a variety of different materials. One common choice is to use sticks. You would basically bind the sticks together with cordage to form a cage. One end would be blocked up while the other end would have a funnel shaped opening. The funnel basically makes it easy for the fish to swim in but hard for them to swim out. The bigger the entrance is, the larger the fish that you can catch. The spaces between the bars can be adjusted to let smaller fish out while keeping larger fish. A rock can be tied to the bottom of the trap to make sure that it sinks to the bottom. You would generally want to have rope or some type of cordage tied to the cage so that you can easily pull it up to check for fish. This is actually a the same pattern used in commercially built fish traps that would buy from a store except that those would be built out of a wire mesh.

Here is an example by the guys over at NorthSurvival showing how to build and use a fish trap using branches.

This is one of my favorite fish traps. It is nice because it is so simple and easy to construct. The basic idea is to convert a plastic bottle into a fish trap. The only drawback is that it is only really good for catching smaller fish. They could either be eaten or used as bait for larger fish. If you are in a survival situation, eating small fish is better than eating nothing. The more food you are able to gather, the better.

This first thing you will need is a plastic bottle. If you happen to have a plastic water bottle in your pack you can use that. If not, you may be able to find one that has been discarded by someone else. You are going to need a cutting tool to cut the bottle and something to reattach it afterwards (string, zip ties, safety pins).

Here is an example of a plastic bottle trap from the people over at "KabyNougat " on Youtube:

This is basically an obstruction in the water that funnels the fish to a desired location. You can funnel them into a small, blocked off area where they can be easily caught. You could keep them alive there for as long as you need so it also serves as a place to store the fish long term. You can access them as needed.

A fishing weir is a very old type of fish trap that has been used by people for thousands of years. It is very easy to construct and it is extremely effective. The basic idea is to arrange rocks in such a way that they form a funnel. The funnel leads into an enclosed area that is surrounded by more rocks. The fish are naturally funneled into the enclosed area but are not likely to find the way out. They tend to get stuck very easily. You can also use wooden posts to construct your wall. This may be easier in some cases because you just have to drive a post into the ground rather than stack a bunch of rocks. You can setup your funnel in rivers, ponds, and tidal waters.

In a river you might set something up so that blocks the river to catch all fish moving downstream. You would place the funnel across the river and place a wall after that stopping the fish from going any further. 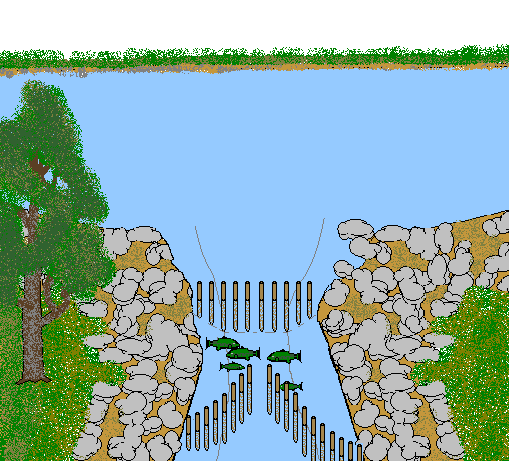 Another place that makes sense to use this type of trap is in tidal waters. This is extra easy because you can setup the trap while the tide is low. When the tide comes in, any fish are naturally led into the funnel. Once they pass that, they will have a hard time moving back. When the tide recedes the fish will be trapped and can be easily caught.

This method will also work very well in still water such as a pond. In this case you might build a funnel near shore. The fish will swim into the funnel but have a hard time finding the small exit to get out. In smaller versions of this a fish might not even be able to properly orient itself before getting stuck trying to escape. In still water it makes more sense to use bait.

Having a blocked off area for storage can be really helpful. If you are catching more fish than you can eat in one day you will need some way to preserve the extra fish. This can be tricky with limited resources. Keeping them alive inside a small blocked off area basically solves this problem.

Here is an execellent example of a fishing weir posted on Youtube by Tim Jones:

This type of fish trap works great when combined with a fish spear. Combining both techniques makes a lot of sense.

Another really interesting type of trap can be constructed using pipes or tubes that lead into a pit. You really need to see a picture or diagram for this one but we will try to describe it as well. you would first dig a hole near shore. You would surround the hole with a wall. You then take one end of the pipe and place it in the water. The other end of the pipe leads up, out of the water and into the pit. Eels will enter into the pipe because the naturally seek out hiding places like this. It is hard for them to go backwards out of the pipe so they continue going up the pipe until they end up on the other end exit into the pit. You can leave something like this over night and find a bunch of captured eels in the morning. Multiple pipes can be used for better results. Keep in mind that you will need to be somewhere with eels. You can't just do this in any body of water and expect to catch something. You really need to know the area and what fish to expect.

Here is the video of how an eel trap works from the people over at the "Amazing Video" Youtube channel. This one is built using bamboo: