This is a great tool to be able to make. It is basically a frog gig. It can be used to spear any number of different things though. It is great for fish, frogs, crabs, and just about anything else. Multiple prongs make it easer to spear a fish without loosing it.

Also, check here if you want to read more about frog gigging.

We have short a demo video here:

DIY frog gigs are relatively easy to construct out of wood. We built a pretty neat one here. You can see a close up picture of the finished product below. The tools we used for this included a hatchet and a Gerber Suspension multi-tool. A good fixed blade knife would have made things a bit easier but we did pretty well with what we had on hand at the time. 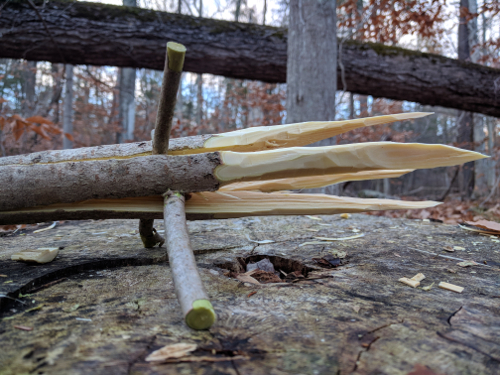 We could have done a few things to improve this spear. First of all we really should have trimmed the sticks that were used to wedge it appart. This would have made it neater and also would have made it more streamlined which is kind of important when trying to move as quickly as possible to spear something. We also could have wrapped it with some type of cordage to keep it held together tightly and to prevent the pieces from moving. Lastly, we really should have carved barbs into the prongs of the spear.

We cut our shaft using the hatchet. Having a large cutting tool saved a lot of time. It would have taken forever just using the multi-tool. We also used the hatchet to split the long end of the shaft into four prongs as shown here. 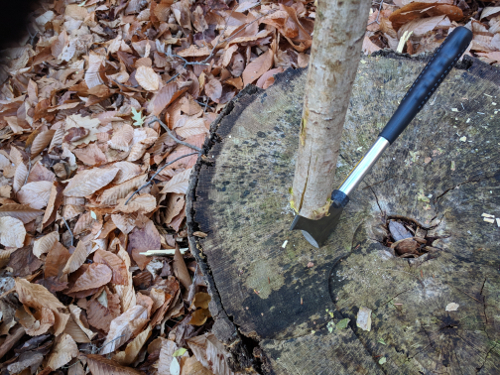 After having initially split the end of the shaft with the hatchet, we wedged a couple smaller sticks into the slots. These serve the purpose of holding the prongs appart. We continued to push the wedges down the length of the spear until the prongs were a reasonable distance appart. See the picture of the unsharpened spear below. 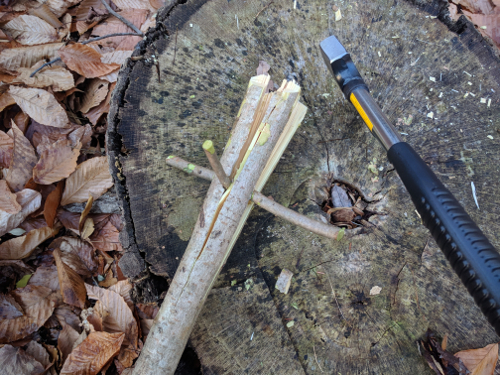 After wedging them appart we needed to sharpen the ends of the prongs. This was done using the blade on my multi-tool. The blade worked well enough but it would have been easier to carve with a fixed blade knife. See the image of the sharpened prongs on our frog gig below. 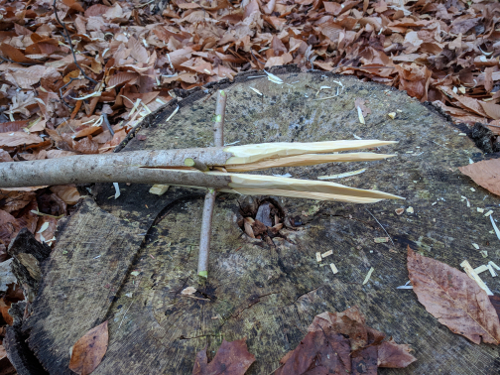 Here is another close up of the spear head on our frog gig. As you can see it is lacking barbs but these would be easy enough to carve. While not purfect this should be sufficient to actually spear things with. I've been able to spear fish in a brook with much less. I have been sucessfull using a stick I found that had only been sharpened on one end by a beaver. This is far better and barbs would only make it even easier. 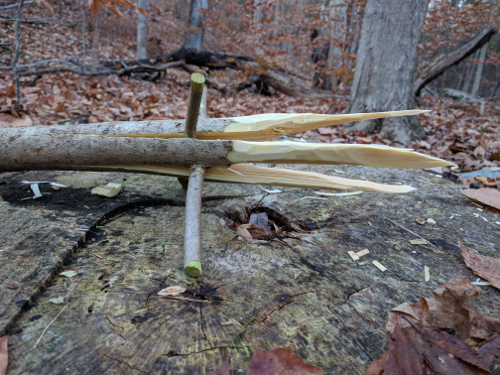 Here is another picture showing more of the actual spear. It doesn't show the entire length of it but it gives you a better idea of how the entire thing looks.

This is the exact type of place where this spear becomes incredibly useful. A body of water like this will tend to be loaded with all sorts of things that can be eaten. This includes everything including frogs, fish, crayfish, and more. My primary target would be fish if I can find them and then frogs. In this specific case it was getting late in the season and we we weren't going to be finding anything. It was too cold for frogs. We weren't going to be finding fish this day either. On a warm summer day (or night) our luck would have been much different. 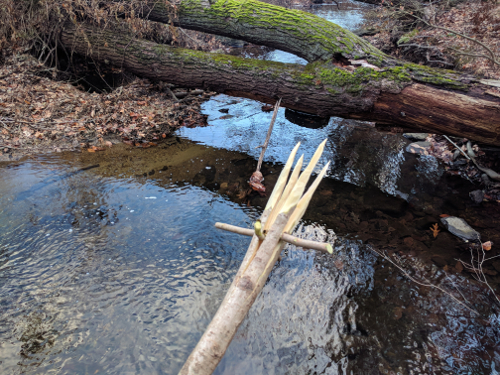 It is often possible to find large fish in small rivers such as this one. You can find many different kinds of fish, even in a river this small. One of the more popular targets though is sucker fish (Catostomidae). These are generally not hard to catch and are a great source of food. If you find yourself by a river like this one, there is a good chance that if you follow it, you will end up finding a larger body of water with more fish such as a lake or pond. You will also likely do well just catching what you can while following the river. Deeper water will make it harder to actually spear anything that doesn't come near the edge.

Here is an image of a failed attempt at a two pronged spear. It actually would have come out somewhat nicely if not for the bend in the stick. The bend was suboptimal since you really just want your spear to be as straight as possible. It could have still been usable but it also prevented wedging it appart any further. It really should have been discarded before getting this far with it. 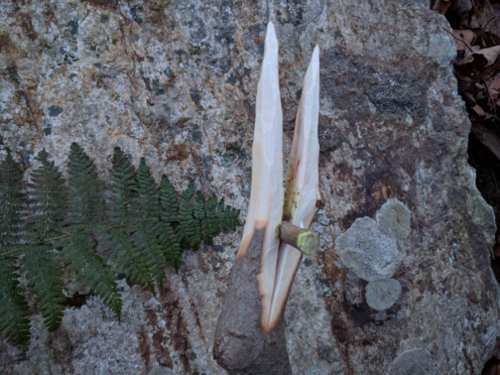 Keep in mind also, that there are many different ways to catch fish. You can construct nets even using only the materials found in nature. You can also construct a variety of different types of fish traps that can be extremly efffective. Some of these are a simple as arraging a few rocks. Some can be as elaborate as weaving basket type traps out of branches.